Lasso can now get a bounce off his rope without having to jump on it, so long as it's not being called back to him (unless you throw it straight down and call it back). This means you can dash into it on the ground or just walk into it to gain height easier.

Controls Recommend:
Gamepad Controls (Xbox layout) // Only able to test with an Xbox controller
D Pad | Movement
A | Jump
X | Throw Lasso (8 direction) — can bounce off of it twice until grounded again or hitting a swing
X Again | If the lasso is out you can recall it by hitting X again
Y | Auto-Throw (you'll see a reticle if you're in range and no wall is in your way)
B | Bullrush (dash)
RB/RT | Shield (hold up to shield above, RB/RT again to put it away)

Keyboard Controls
WASD | Movement
J | Jump
K | Throw Lasso (8 direction) — can bounce off of it twice until grounded again or hitting a swing
K Again | If the lasso is out you can recall it by hitting J again
Space | Auto-Throw (you'll see a reticle if you're in range and no wall is in your way)
L | Bullrush
H | Shield (hold up to shield above, press Space again to put it away)
In Case You Encounter Any Bugs:
R | Restart Room
Hold Shift and press R | Restart Game

As Lasso the Cowboy Bull you'll bullrush through levels filled with killer cacti and treacherous jumps as you bounce off your lasso to pull off acrobatic stunts beyond the ability of any other bovine.

Originally made for GDKO, a game jam tournament hosted by Xanderwood. This is an updated version of a previous entry meant to accomplish the Round 5 task: "Recreate 'Leaper,' a game from the 1980s." I used Lasso's existing mechanics to try and capture the essence of the game.

This version also contains updated Round 1 and 2 entries with the health system and new movement:

Round 1 Task: Create a playable character with a unique ability.

Round 2 Task: Create a 'toy' for your character to interact with.

CREDITS
- All art, code and concept by MF of Endmark Games.
- Thaleah Fat font used in game (from Tiny Worlds on itch.io).
- Rewild 64 palette by Kelbster on Lospec.
- "Fastest Gun in the 8-bit West" used with permission of OkamiDeluxe.

Special Thanks to my wife, AirBear, for supporting me during round one!

Hmm. Which browser? I know it works for my buddy using Chrome.

Crome as well, the key to start is enter right?

Yes ... or A on an Xbox gamepad. Any chance your cursor is outside of the window and it isn't registering your input on the keyboard?

I just tried now and the keyboard and gamepad both work. 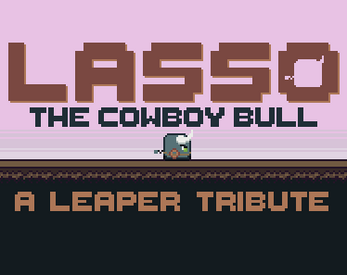